Throughout the history of the United States, the country and its people were protected from externally-derived harm to some extent because of the oceans on its eastern and western coasts. However, as technology advanced, the United States quickly grew vulnerable to threats coming over or across the Atlantic or Pacific Oceans. America now faces threats not only at our shores from illicit smugglers but internationally as state actors exploit maritime environments to achieve their strategic objectives. The United States must continue to develop situational awareness in the maritime environment in order to understand the threats we face on its own shores and far beyond them.

Whether it’s law enforcement or national defense, important government and military missions need to be carried out beyond U.S. land borders. The sheer vastness of the maritime theater makes interagency communications and monitoring extremely challenging for these public safety and military organizations. It’s a problem that military leaders have often referred to as “the tyranny of distance” and it’s very real. But it can also be overcome with technology and innovation.

The twelve-mile area that extends out from America’s shores into the ocean requires situational awareness, patrolling, and policing just as much as the country’s northern and southern land borders. Much like the northern and southern land borders, these maritime borders are massive. However, unlike land borders they are mostly wide open, lacking the impassable mountain ranges or other uncrossable barriers that restrict the areas where illegal opportunities can occur. The oceans that used to separate us from harm have now become areas exploited by individuals who seek to smuggle in narcotics, humans, and contraband.

Maritime environments create many challenges for law enforcement and military organizations. The “tyranny of distance” that is inherent in these massive oceans and seas has traditionally spread agency resources thin and forced them to make compromises in monitoring and policing.

Criminal actors rely on the vastness of the ocean to conceal their movements from law enforcement officials and enter the US by accessing U.S. shorelines. By the time they actually reach land in the United States, it can be too late for law enforcement to interdict without intelligence or awareness of where the smugglers will land. This means America’s vast maritime border needs to be monitored in some way, which is virtually impossible if relying primarily on personnel  – no matter how great (or large) U.S. military and border security agencies already are. Furthermore, even with high-tech monitoring equipment, the unique nature of this environment (miles out to sea and far from the terrestrial networks that are often relied upon for connectivity) also limits security officials’ access to critical communications and situational awareness tools.

State actors also understand the importance of operating in maritime environments as well as using them to benefit their illicit activities. China and Russia both use oceans and seas in order to increase their power and influence. Furthermore, illegal activity for profit is a global phenomenon that can impact American consumers, businesses, and security. Understanding these activities can benefit America’s security, safety, and economy.

The unique challenges at sea aren’t limited to the waters off U.S. borders. America’s military also has to understand the seemingly endless reaches and depths of the planet’s bodies of water. Especially today, when the largest, near-peer adversaries are located on the other side of a vast ocean. As the United States pivots to strategic competition with large and sophisticated adversaries (like China and Russia) the Department of Defense will likely focus on maritime environments such as the Pacific Ocean, South China Sea, Mediterranean Sea, and other strategic large bodies of water.

…internet of things (IoT) sensors and devices…can stretch the federal workforce by monitoring and patrolling areas that government agencies simply don’t have the personnel to monitor or patrol. It’s that ability to extend the reach and effectiveness of personnel that makes IoT the perfect solution for overcoming “the tyranny of distance” in the maritime domain.

While the United States military has the greatest and most powerful military ever assembled, the military will always have fewer personnel, vessels, and other human resources than would truly be necessary to cover the vastness of the oceans. Also, much like these other organizations, the military finds itself operating on open seas far away from the traditional terrestrial networks that it relies on for connectivity. So the question remains, “how do we reduce this tyranny of distance?”

IoT Provides Connectivity on the Water

One of the most ubiquitous digital transformation trends we’ve seen across the federal government in the past few years is the use of technology to bolster government workforces and make them more effective. For example, AI technology found its way into government websites to help answer frequently asked questions from constituents, improve constituent service, and free federal employees up to focus on more mission-critical tasks. This is also true with internet of things (IoT) sensors and devices that can stretch the federal workforce by monitoring and patrolling areas that government agencies simply don’t have the personnel to monitor or patrol.

It’s that ability to extend the reach and effectiveness of personnel that makes IoT the perfect solution for overcoming “the tyranny of distance” in the maritime domain. For example, let’s look at the fishing industry. Meeting the needs of the world’s massive appetite for fish at a time when fish populations are decreasing – and strict rules have been put in place for where and how fish can be caught – has resulted in a dramatic increase in illegal fishing activity. To protect consumers, and to ensure that fish populations are strong and healthy for future generations, government agencies are working to monitor and track the movements of commercial fishing fleets.

The “tyranny of distance” that is a constant challenge for maritime missions makes monitoring fishing vessels and fleets difficult – especially for government agencies with limited resources. To help with that problem, IoT sensors are deployed to help government agencies track fishing fleets and see their movements to ensure that they’re operating legally. 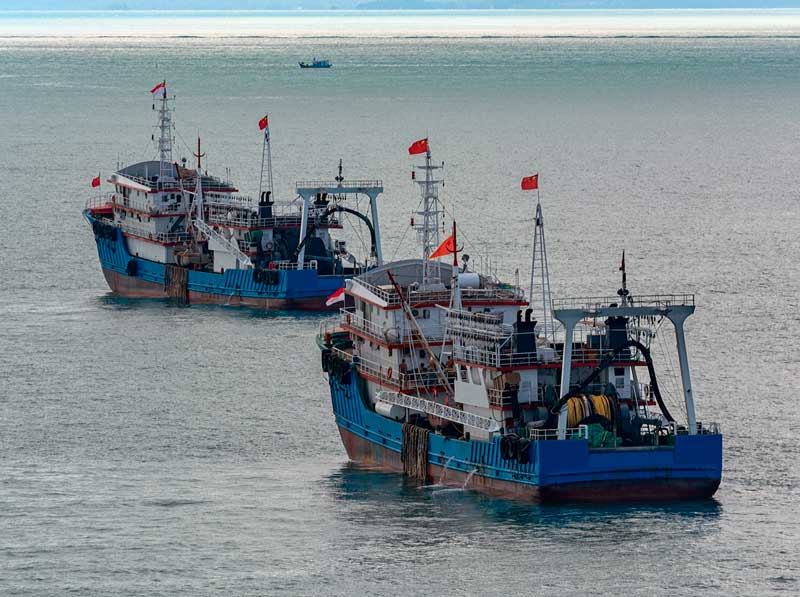 The same technology could be used for other missions in maritime environments across the rest of the government and military. Similar IoT sensors to those being used to track fishing fleets could be used by law enforcement to monitor motion and activity for drug smuggling or human trafficking. Or they could be used by the military to generate alerts for adversary troop or vessel movements.

IoT sensors and devices can help combat the “tyranny of distance” that the world’s seas and oceans create for the government. However, they’re only useful if they’re connected.

Operating in the maritime environment is challenging for other reasons aside from just distance. In the middle of the ocean, there are no terrestrial cellular or WiFi networks to deliver the critical communications and situational awareness capabilities that government and military organizations rely on. This is also a challenge when using IoT sensors and devices since the very nature of these devices requires connectivity. However, that connectivity could be delivered with mobile mesh networking.

Mobile mesh networking radios function by receiving and retransmitting signals – effectively bouncing a signal from radio to radio – to create an ad-hoc network that can cover wide areas. In coastal or maritime environments where cellular signals are unavailable, mobile mesh radios could be connected to individual IoT sensors and devices and be used to transmit low-data signals – including alerts.

The twelve-mile area that extends out from America’s shores into the ocean requires situational awareness, patrolling, and policing just as much as the country’s northern and southern land borders.

Deploying an elevated relay (one that has been placed at a high elevation via an aerostat or other aerial vehicle) could create a large area network, effectively providing connectivity for a number of IoT sensors over a substantial geographic area. The data and alerts generated by the IoT devices could then be backhauled to a central location, such as a forward operating base or law enforcement field office, via satellite.

Using mobile mesh in this way eliminates the need to utilize multiple, expensive satellite connections for each IoT sensor and makes the entire IoT initiative more economical and easily deployable. Unlike satellite, which requires hardware purchases and subsequent operating costs for the capacity utilized, mobile mesh has no recurring costs or usage fees. The organization would only need to purchase the mobile mesh networking radios once and then could use them for connectivity for the life of the device with no additional fees.

Maritime environments create many challenges for law enforcement and military organizations. The “tyranny of distance” that is inherent in these massive oceans and seas has traditionally spread agency resources thin and forced them to make compromises in monitoring and policing. The lack of terrestrial networks in these environments also makes communications and situational awareness either nonexistent, ineffective, or expensive. IoT and mobile mesh can combine to increase the reach of these organizations and eliminate the need to compromise. And they can do so without breaking the bank.

For the United States, deploying mobile mesh networks in the maritime environment can enhance the safety, security, and economy by providing enhanced situational awareness at U.S. shores and far beyond in areas traditionally denied to us by the “tyranny of distance”

To learn more about how mobile mesh networking can provide an off-grid communications network for law enforcement personnel, click the links below:

Jameson Morgan is the Director of Partnerships at goTenna.