When Disaster Strikes Pt. I – The impact of lost comms during emergency response operations

In natural disasters and other emergency response situations where the existing communications infrastructure may be compromised, degraded, or destroyed, it is critical that first responders dispatched to the scene have a means of communicating and sharing locations with one another. If not, the success of the mission and the lives of first responders may be put in jeopardy.

What is it actually like on the ground in emergency situations when communications are unavailable? What does situational awareness and communications look like when cellular networks and radio relay towers are down? And how have first responders used the tools at their disposal and ingenuity to overcome this problem in the past?

To get a first-hand account from a first responder who has experienced operating in natural disaster scenarios where connectivity and communications have been lost – The Last Mile sat down with Greg Albrecht, a first responder and goTenna Public Safety Technical Consultant.

During our discussion, we asked Greg about his personal history of first response in dynamic environments, as well as how vital a role communications and situational awareness played in those scenarios.

The Last Mile (TLM): Have you ever been in a natural disaster or emergency response situation (wildland fire, tornado, etc) where existing communications infrastructure was compromised? What was the situation like? 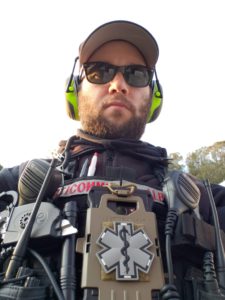 Greg Albrecht: You don’t really need to wait for a disaster to see what an overwhelmed communications infrastructure looks like. You can lose connectivity at a sporting event, a festival, or a parade. And it’s not necessarily infrastructure failure. It’s more of an infrastructure overload.

The San Bruno gas pipeline explosion is a prime example of comms infrastructure being taken down due to overloading. When all the first responders arrived on the scene, none of their cell phones were working due to the concentration of people attempting to connect via cellular connectivity. The flip side of that would be when a region or area is hit with a natural disaster that completely knocks out power or cell phone towers, or the backhaul to the cell towers is down.

“Comms and situational awareness are absolutely critical every step of the way during an operation, so if the infrastructure does go down, that could potentially put us in an extremely dangerous position.” – Greg Albrecht

Luckily, cellular carriers are incentivized to bring that connectivity back up as quickly as possible, but their “quick” timeline is much different from the timeline of a first responder. We don’t have time to wait for AT&T or Verizon to bring in a cell on wheels (COW). It will take them quite a while before they even get to that point. And those crews will often rely on first responders to provide them safe access to the area – first responders that don’t have communications or situational awareness because their networks are down.

There is a PACE plan built into these types of emergency response situations that help ensure that you have other forms of comms to fall back on, but anything can happen and those backups can still fail on you.

For my primary form of comms, I would use my radio, but if the radio doesn’t work what do I use? I may have a satellite phone, but will that enable situational awareness of where my other teammates are during a dangerous operation?

If we were to use CAL FIRE as an example, I would need to have situational awareness of all my teammates before cutting down and dropping a tree. Or if there is about to be an aerial drop of water or fire retardant, we would need to know everyone’s location beforehand.

In California, we face these emergency response challenges every single summer, whether its wildfires, floods, earthquakes, civil disturbances, or mudslides. Comms and situational awareness are absolutely critical every step of the way during an operation, so if the infrastructure does go down, that could potentially put us in an extremely dangerous position.

Greg Albrecht: I currently have a team out working on a film production. That team constantly has to coordinate with each other when they are moving and relocating trucks, props, pyrotechnic machinery, etc. We need to be able to communicate and keep tabs on the real-time locations of crew members on set.

“Now that we have capabilities today that enable clear comms and situational awareness, mission and operation teams are now much safer than they were before.” – Greg Albrecht

Even if we have an airtight plan and schedule for all the production components to come together, we still have to be able to keep in touch with each other and coordinate effectively. The coordination aspect is no different from a disaster scenario. If we’re not coordinating effectively, and there is a pyrotechnics crew operating without a fire crew knowing about it, that instantly puts lives at risk.

It is the exact same in a dangerous wildfire scenario. If the pilots are about to drop a load of water with no situational awareness, they are essentially flying blind. Now that we have capabilities today that enable clear comms and situational awareness, mission and operation teams are now much safer than they were before.

TLM: When comms and situational awareness infrastructure is lost, what have responders often fallen back on? Have they traditionally gone without, or have they embraced less traditional commercial or amateur solutions to meet that need?

Unfortunately, due to the concentrated amount of attendees Instagramming or updating Facebook about what a great time they are having, the cell networks will invariably get overloaded and become unreliable. When that fails, our contingency is what we call “sneaker net,” which entails physically walking messages back and forth between each other.

In other scenarios, we may implement more expensive options, with our primary being a voice radio – typically a repeated frequency or something similar to a radio system with a P25 system.

Our alternative in the PACE plan might be a simplex channel that would just be radio-to-radio, which, of course, is constrained to line-of-sight. Our contingency might be a satellite phone, which is the most expensive option and it’s not very high-throughput. It doesn’t allow a heavy flow of messaging to be sent and received. It only allows the end-user to send one message.

In municipal disaster response, a different approach is taken, which is satellite and then some variation of amateur radio. Having amateur radio is always nice to fall back on. In fact, it’s in most operational plans for faster response. I personally don’t think it gets employed enough, but I do have to admit it is certainly a lot more expensive. There is quite an amount of technical overhead required, such as licensing and training. And it’s also not turnkey.

TLM: Have you, personally, ever experienced a dangerous situation that was made more dangerous by a lack of comms and situational awareness? What happened, and what was it like?

Greg Albrecht: In 2020, I was deployed to the Glass Fire as part of a strike team. We were charged with bringing up a helitak base to allow CAL FIRE to deploy their tanker drops. They needed Internet onsite, so we were going to bring and set up SATCOM dishes.

“We went up there completely blind. We had nothing. No cell phones. No amateur HF radio. Nothing. I felt so cut off…It was a horrible feeling.” – Greg Albrecht

What we didn’t realize was that in order to get to Angwin, California – which is in the mountains of wine country – we had to drive and navigate through a valley to get to the site. The fire had already passed through and burned out all the fiber optic lines going up to the valley. Other than power, there was nothing there because all the fiber was destroyed. The only way to get connectivity back to this mountain town was through satellite.

Luckily there was a plateau and we could actually use a satellite, but we didn’t know that before travelling to the site. We went up there completely blind. We had nothing. No cell phones. No amateur HF radio. Nothing. I felt so cut off because we didn’t even have the basics, and I had no idea where the rest of my team was.

I personally never want to experience that again. It was the worst feeling. Luckily nothing bad happened, but if the fire had changed direction, I had no accountability for my team. We had no situational awareness. No one was communicating with anyone. It was a horrible feeling.

TLM: In these emergency response disaster scenarios, locating those in need of rescue and charting paths to them is clearly essential. But we also need to track those that are tasked with recovering them, or risk losing them, as well. How has this traditionally been done?

Greg Albrecht: Resource tracking is a tried-and-true skill of emergency response and wildland fire. But it’s very analog. They use things like T-cards or resource cards to track individual units or individual teams. It’s very manual.

A problem I run into as a medic is not being able to get real-time information on the location of the incident, my medics, transport units, or where my closest supervisor is. I also run into challenges with getting my people there and back, in addition to tracking how many patients, suspects, or detainees are involved.

Check back next week as we continue our conversation with Greg Albrecht and discuss how mobile mesh networks in conjunction with ATAK can bolster communications and situational awareness during emergency response.

When Disaster Strikes Pt. I – The impact of lost comms during emergency response operations