Each branch of the U.S. military has a technological research and development (R&D) arm dedicated to advancing and strengthening the organization through the adoption of innovative and new technologies. Though the military conducts its own testing and deployment of novel technologies in-house, the U.S. Department of Defense (DoD) also recognizes the critical role industry plays in supporting and bolstering the military’s position as an innovative competitor on the world stage.

Project Overmatch is a high-priority initiative aimed at connecting platforms, weapons, and sensors together in a robust Naval Operational Architecture (NOA) that integrates with Joint All-Domain Command and Control (JADC2) for enhanced Distributed Maritime Operations.

One of the companies that participated in the NetANTX event was goTenna, which submitted its VINE routing protocol — part of its Aspen Grove capability, a new class of mesh networking protocols with ultra-low overhead that enables unprecedented scalability under low-bandwidth and other challenging conditions. goTenna won first-place in the Networks Prize Challenge category, which focused on exploring new networking technologies that advance the reach, capacity, and resiliency of the maritime tactical network of networks.

goTenna’s Chief Scientist, Ram Ramanathan, and Director of Firmware Engineering, Christophe Servaes, stopped by The Last Mile to discuss the Navy’s Project Overmatch, pull back the curtain on its submission process and ultimate win, and share what’s next for the Aspen Grove capability. 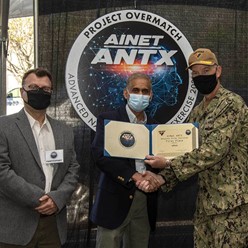 Here is what they had to say:

The Last Mile (TLM): What is Project Overmatch? What does it involve? Why was goTenna involved in it?

NetANTX was a way to rapidly identify cutting-edge technologies outside of the Navy for use within Project Overmatch. They created it as a, “challenge with prize money,” to help quickly identify what technologies are being developed by industry partners that they can leverage and use.

One of the challenges pertained to network routing technology and the other was for AI-based analytics. We have developed some novel mesh networking protocols that significantly outperform traditional methods. So here at goTenna we said, “Hey, this sounds very similar to what they’re asking for! We already solved the problem so we should have a good chance if we submit.”

We then decided to enter the competition, and that’s ultimately how we got involved in it.

TLM: What were your roles during the project?

Christophe Servaes: There were two parts to the project. The first consisted of migrating the VINE protocol from the goTenna Pro X embedded environment to the Linux environment using IP v4 addressing. The second part involved updating the protocol to ensure optimal performance even within the contested conditions of Project Overmatch.

I spent most of the time porting and implementing the code, and Ram spent most of his time running simulation, analyzing the results, proposing some amendments, and providing overall architectural guidance. And it was time well spent, as we came away with the win.

TLM: With regards to our project submission, what requirements does goTenna fill for the Navy? How does it apply to their day-to-day life?

The Navy is looking for new capabilities that enhance performance in contested, low-bandwidth environments. Winning the NetANTX contest validates that the VINE protocol solves this problem admirably.

TLM: What existing challenges does the Navy face with its networks and connectivity? How does the unique nature of the Navy and its mission (operating in the sea domain with little terrestrial network connectivity) create challenges for the Navy? How does it impact their ability to embrace new technologies and digital transformation initiatives?

Ram Ramanathan: The Navy has a diverse set of platforms. Some platforms, like ground stations, have no mobility. Some have very high mobility, like aircraft. And some have medium mobility. Each of them has different types of radio interfaces. They have different speeds, different robustness, and other differences.

As I mentioned previously, connectivity in contested, austere environments can be unpredictable. It’s sparse, highly dynamic, and the bandwidth is low. While the propagation of signals is actually better than with terrestrial networks, the distances are also much higher, which presents a challenge.

The Navy challenge sought protocols that can work over multiple interfaces due to the diversity in connectivity. They also need a way to ensure reliable, assured connectivity and communications in these low-bandwidth environments.

TLM: What future technologies or technology trends will this allow the Navy and other military organizations to utilize moving forward? Can goTenna play a role in Navy IoT programs and Big Data programs/initiatives?

At goTenna, we pioneered a new class of mesh networking protocols based on our patented embedded control approach. This approach will be beneficial to military IoT programs and implementations, as long-range, low-power IoT sensors and devices face the same low-bitrate challenges as contested environments.

We are developing a version of our Aspen Grove routing protocol for connecting long-range, low-power IoT devices. 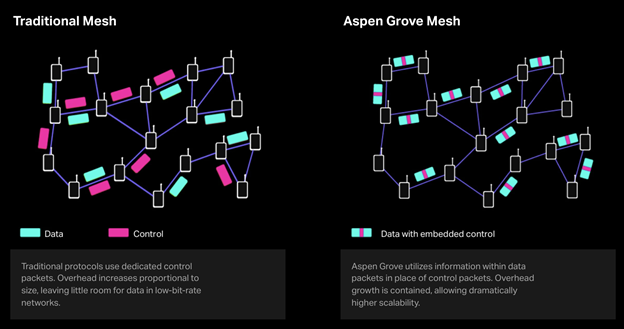 Using mobile mesh networking to connect these devices allows them to be constantly monitored even when terrestrial connectivity is unavailable, contested, or denied. It also is a lower-cost alternative for the military than connecting these sensors and devices via expensive terrestrial networks, such as cellular networks.

TLM: What was the most challenging part of the project for the goTenna team?

Christophe Servaes: The most challenging part of the project was its short duration. It was about seven weeks from start to finish.

Another challenge was porting the protocol to work outside of our goTenna devices. We have a VINE protocol that we were confident fit perfectly in that environment to respond to all those constraints. Although the code is deployed on our goTenna Pro devices, it was not ready to run in a Linux virtual machine using Internet-style addressing. About three-fourths of the duration of the project was spent building the code, putting it into this new framework, and getting it working.

TLM: What are the next steps now that goTenna has won?

Christophe Servaes: Great question! Although we won, we still believe that we have some improvements that we can make to our solution. While we had a very short period of time to meet the contest requirements, we also have other protocols.

We talked about the VINE protocol, which is the main protocol we are using right now. But, we also have our ECHO protocol, which helps greatly with broadcasting messages. If we bring that protocol into the game, we will further improve capability and performance.

The Navy emphasized that they want to continue exploring and testing our technologies and protocols. We hope to have an opportunity to further advance this work with the Navy and other services.

Ram Ramanathan: Because of this project, our Aspen Grove protocol – which was tied to the hardware – can now live on its own as a software solution. In just seven short weeks, we took a protocol that was originally tied to the goTenna hardware and enabled it to run outside of the device.

This project has made this capability possible for goTenna as well as the government. The software can run on Navy networks. We’re excited to see how this continues to mature and develop over time, and the different ways in which the military will embrace these technologies and protocols to meet their connectivity and communications challenges and requirements.