In my home state of Texas, we’ve experienced three “five hundred year floods” in just the past few years. And that’s a similar story to what we’re hearing across the country, where flooding, wildfires, hurricanes and other natural disasters are seemingly increasing in frequency. But they’re not just happening more often, they’re also more dangerous, deadly and destructive than what we’ve seen in recent history.

When these massive natural disasters strike, it’s teams of first responders – including groups like the swift water rescue group that I work with here in Texas – that step up to try to save lives and keep people safe. But the deck is often stacked against us because of one often unexpected casualty of these natural disasters – cellular networks.

Many people don’t realize that the critical communications infrastructure that transmits the signals that keep their cell phones and other devices connected are often destroyed in natural disaster situations. The electronics at the base of these towers are often compromised in flooding. Wildfires will burn through the cables that connect them to terrestrial networks. Hurricanes will blow down cabling and damage electronics making them inoperable. Even lightning strikes can impact a cell tower and knock out service.

But it’s not just natural disasters that can deny cellular networks to first responders and emergency response personnel. The people in the vicinity of a situation can do that too. Take the Boston Marathon bombings or 9/11 as an example. Those terrorist attacks resulted in so much cellular traffic that the systems were overloaded and failed.

As a result, when disaster strikes – whether it’s a natural disaster or a man-made disaster such as a terrorist attack – first responders often find themselves without access to the functioning communications networks that they would normally rely on to keep them connected. And that can cause some serious problems when it comes to situational awareness and public safety.

No connection means no common operating picture
Four years ago, we had massive flooding in Texas that resulted in the need for swift water rescues across my region. While we were able to get calls into the dispatch center, the people at the dispatch center couldn’t communicate with the people in the field because flooding had compromised the cellular towers in the areas they were operating.

To overcome this lack of communication, people would drive 20 miles to get to first responders and share information with them. Unfortunately, while this system was the only alternative at the time, it wasn’t very effective or efficient, and it ultimately could have cost lives.

For example, a message came in saying someone had their car swept off of a bridge, they were stuck in a tree and in need of swift water rescue. Unfortunately, that person didn’t really know where they were or how to give directions to my team so that we could find them, so it took six hours for my team to find them. While our team was searching for this individual, two teams started looking for us because they didn’t know where we were and they were nervous that something bad had happened.

This story is true, and it’s a great example of how a lack of situational awareness and a common operating picture can impact disaster response activities. Since the dispatch center couldn’t see where their teams were and check in on them, they had to roll other teams to go looking for them, effectively keeping resources from doing what they needed to do to help save lives. And that was all because cellular networks were compromised as a result of the flooding.

But there is another way to give public safety and disaster response personnel situational awareness and connectivity that can’t be denied because of a storm, flood, fire or terror attack – mesh networking.

The key to unlocking situational awareness for public safety
Mesh networking is a technology that essentially sends a radio signal from one node, or device, to another. As each device receives the signal, it then rebroadcasts it to other nodes that are further from the source and haven’t yet received it.

Mesh networks are capable of sending a radio signal over extremely long distances and make it possible to communicate even in environments where connectivity isn’t available. This is ideal for public safety and disaster response situations, where those networks are either unavailable or compromised.

Mesh networks don’t require any dedicated networking equipment or hardware, just a small device that is carried with each first responder that connects via low-output Bluetooth or USB to their mobile device. This means that they can be set up almost instantaneously when disaster strikes.  This is also ideal for disaster response, since many natural disasters or man-made disasters happen unpredictably and with very little warning.

Once a mesh network is established, it can create a common operating picture where everyone on the network – including the dispatch center – can now see each other on a map and have rudimentary communication with each other, regardless of whether there are working cellular networks or not. This means that everyone is connected, everyone knows where the other is physically located and if they’re okay, and every team can focus on what is truly important – saving the lives of citizens and delivering help where it’s needed.

Natural disasters are happening more often. They are also stronger and more impactful than ever before. Whether an emergency scenario is a natural disaster or man-made threat, our public safety personnel and first responders need to be prepared to form a connected, collaborative response even if cellular networks are compromised or denied. Mesh networking can make that a reality by giving everyone involved in emergency response a common operating picture without the need for terrestrial networks.

Emergency communications: What is a PACE Plan? 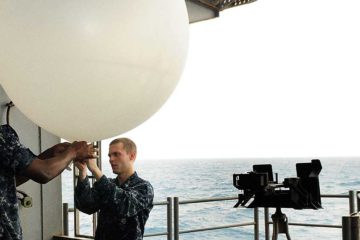