Whether an 18-wheeler containing hundreds of pounds of hazardous material crashes on a highway or a category 4 hurricane hits a coastal town leaving a trail of devastation in its wake, the first 15 minutes after a disaster are by far the most critical in any response operation.

While each disaster that a first responder will face is inherently unique, careful and collaborative preparation allows first responders to be able to approach an incident or disaster both effectively and efficiently. For Anna M. McRay, assistant director of emergency management for New Hanover County, N.C., this preparation has helped her develop response plans for “everything from armadillos to zombies.”

From preparation, communication, cooperation, and situational awareness, here are the main takeaways from Police1’s webinar: “The first 15 minutes of disaster: Creating order from chaos.”

While the overall response to any disaster, big or small, will ultimately take longer than 15 minutes, the performance of first-responders during those first 15 minutes is a likely indicator of how effective the remaining response operation will be. Establishing initial scene management procedures and effective communication channels between responding units within those 15 minutes after a disaster greatly improves the overall efficiency of the response operation as a whole.

One of the procedures any response unit must consider is setting up a staging area and command center. Brian Hupp, Director of EMS at Maury Regional Medical Center, believes that one of the biggest benefits of establishing a unified staging area or a unified command post is that it gives fire, law enforcement, and EMS the ability to share equipment. “Let’s say I need backboards but I’m not ready for transport units to come in,” he explained. “We can allocate backboards from ambulances in staging to the next-in-fire apparatus and that fire apparatus can bring in that equipment.”

During any response operation, McRay likes to use the simple acronym c-salt: capability, size, amount, location, time, and type. According to her, if you can share that information with the emergency operation center, resources can start to be collected which would help expedite getting the appropriate resources to the staging area.

By creating this staging area or unified command post, fire, law enforcement, and EMS can effectively work in conjunction with one another, sharing those vital resources and information with each other to accomplish a unified goal.

However, in any response operation, one can’t ignore strategic and tactical considerations such as life safety, incident stabilization, and property-environmental mitigation. With over 28 years of experience in law enforcement, Lieutenant W. Michael Phibbs likes to slow down and ask these immediate questions:

“It really comes down to the need to slow down to go fast” -Anna M. McRay, Assistant Director of Emergency Management, New Hanover County, NC

Asking these questions, according to Phibbs, allows him and other personnel to really focus on the main objectives of any response, and use up those vital first 15 minutes in a productive way.

“A lot of times you’ll see police officers just assuming the shift commander or whoever is in charge. Until you say you’re in charge, you’re not in charge.” Phibbs explained.

For David Pulliam, Fire Battalion Chief for the City of Richmond, VA, the biggest thing is creating interagency relationships in order to not only prepare but execute an effective disaster response operation: “When a 911 call comes in, nobody cares what’s on your badge. Nobody cares about what’s on your collar. They want a confident group of people working together to protect that life and mitigate that incident.”

McRay explains that by practicing together and forming trust between one another, she sees no reason why fire, law enforcement, and EMS can’t support each other. A law enforcement officer should be able to tell an EMS operator or fire responder what to do and vice versa. By sharing the load, first responders can ultimately focus on the task at hand. She believes that “there will be enough for everybody to do” and that “nobody wants to take over anybody’s role.”

McRay also believes that while each disaster is ultimately unique, creating plans ahead of time can really improve the effectiveness of rescue operations. Running through training and simulations is of course the best way to train, but even just grabbing a coffee, sitting down, and discussing different scenarios is a great way to review and improve communication strategies and processes for a more succinct operation.

Hupp discussed that he serves a largely rural area, and “with that, several of those departments train with our emergency management and local volunteer agencies.” For example, during a water rescue, all of the animal control officers are dual trained in water rescue. Additionally, Hupp believes that the primary success from an EMS standpoint is determined by the first EMS providers on the scene. A supervisor is a great asset, but it might take some time for one to arrive on the scene. Thus, he relies on EMS providers who are the first ones to put it in park, to begin triage if able, and work with public safety partners. In the field, some of his principle considerations include:

By discussing and developing this process beforehand, he and his team can efficiently carry out rescue operations with an actionable plan in hand. Everyone knows their role, and can immediately start conducting the necessary requirements in those first 15 minutes.

At the end of the webinar, the panelists were asked:

“How can effective communication be achieved between command posts and operators in the field, especially when scenarios can change and evolve in a matter of seconds?

When responding to a disaster or incident, oftentimes responders will use either radios or cellphones. For Lieutenant Phibbs, he and his team once discussed how overcrowding cell networks and radio channels had the potential of knocking down network systems. “And then what do you do,” he asked. “It’s going to be critical to work through those different channels so you can get those high-level talks down to your strike team leader and task force leaders.”

The key is empowering, training, and directing your people to make those decisions when they get on scene,” -Brian Hupp, Director of EMS, Maury Regional Medical Center

For any first-responder, communication and situational awareness are of utmost importance and having a pre-established plan that addresses the dynamic nature of an emergency event can greatly improve response effectiveness. Hupp recommended that having a pre-established communications plan is definitely the answer to a scenario like this, as if an incident progresses or escalates in an erratic manner, there is already a plan in place to deal with it.

For officers keen to get on the scene, resource accountability is number one. It’s all about situational awareness. Not only do you need to know where you are, but you need to know where your people are. Supervisors in the field not only need to see what’s going on but also keep an eye on new people coming in. That includes sending messages to bring people in, re-locate them, or update them with new information. That also includes sending messages to personnel telling them not to do something or sending them off the scene. “That’s when you’re going to start thinking about GIS,” Phibbs explains. “Look at the bigger picture.”

4. What about after the first 15 minutes?

While the first 15 minutes after a disaster are the most important, disaster response is often long-term.

For example, McRay referenced Hurricane Florence and how although it was “just a category 1 when it made landfall,” it had huge impacts and resource needs.

“It’s going to be 7 to 10 years before we completely recover from that,” she stated. “You have to be able to look at that long-term continuum.”

No matter how big or small a disaster will be, the panelists ended with this piece of advice: Always plan for that big one, because when it comes, it’ll be easier to gather that data, activate those contracts, and know what people will need. 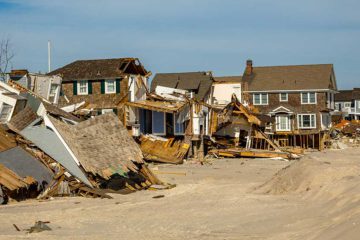