Mobile mesh networks provide device-to-device connectivity when centralized infrastructure is either unreliable or unavailable. Whether each network “node” is mobile or not, the defining features of mesh networks — decentralized, infrastructure-less, routing over multiple “hops” — have manifested themselves over the last several decades in different forms, for different applications, and by different names. Today’s mobile mesh networks have their roots in decades of U.S. military research and development.

Evolution of Mesh Networking at DARPA
Mesh networks are often referred to as “packet radio networks,” “mobile ad hoc networks (MANET),” or “sensor networks.” Their history dates as far back as the early 1970’s with the development of packet radio networks by the U.S. Defense Advanced Research Projects Agency (DARPA), that sought to replicate the ARPANET (the forerunner of the current Internet) over wireless. These networks used bulky low-throughput radios built by Hazeltine, and were the foundation for a long thread of mesh technology development within the military.

The goal of early mesh networking research conducted by DARPA for military applications was (in keeping with the concerns of the era) to exploit new computer technologies to meet the needs of military command and control against nuclear threats, achieve survivable control of U.S. nuclear forces, and improve tactical and management decision making.

The Packet Radio Network (PRNET)
The Packet Radio Network (PRNET) was the earliest military foray into mesh networking development. A set of early, experimental mobile ad hoc networks funded by the Advanced Research Projects Agency (ARPA, and later, DARPA), the first PRNET was established in the San Francisco Bay area in 1973. PRNET’s aim was to test the feasibility of using packet-switched, store-and-forward radio communications to provide reliable multi-hop communications between mobile vehicles without the need for a central station.

PRNET was sufficiently developed by 1977 so as to enable its participation in the first Internet demonstration on November 22, 1977. This trial linked a mobile vehicle in the PRNET to nodes in the ARPANET, and to nodes in London via SATNET.

The PRNET program eventually grew to include multiple PRNETs, comprised of dozens of nodes and terminals. PRNET remained in place until 1986, when it was replaced by Low-Cost Packet Radio (LPR) as part of DARPA’s successor project, SURAN. 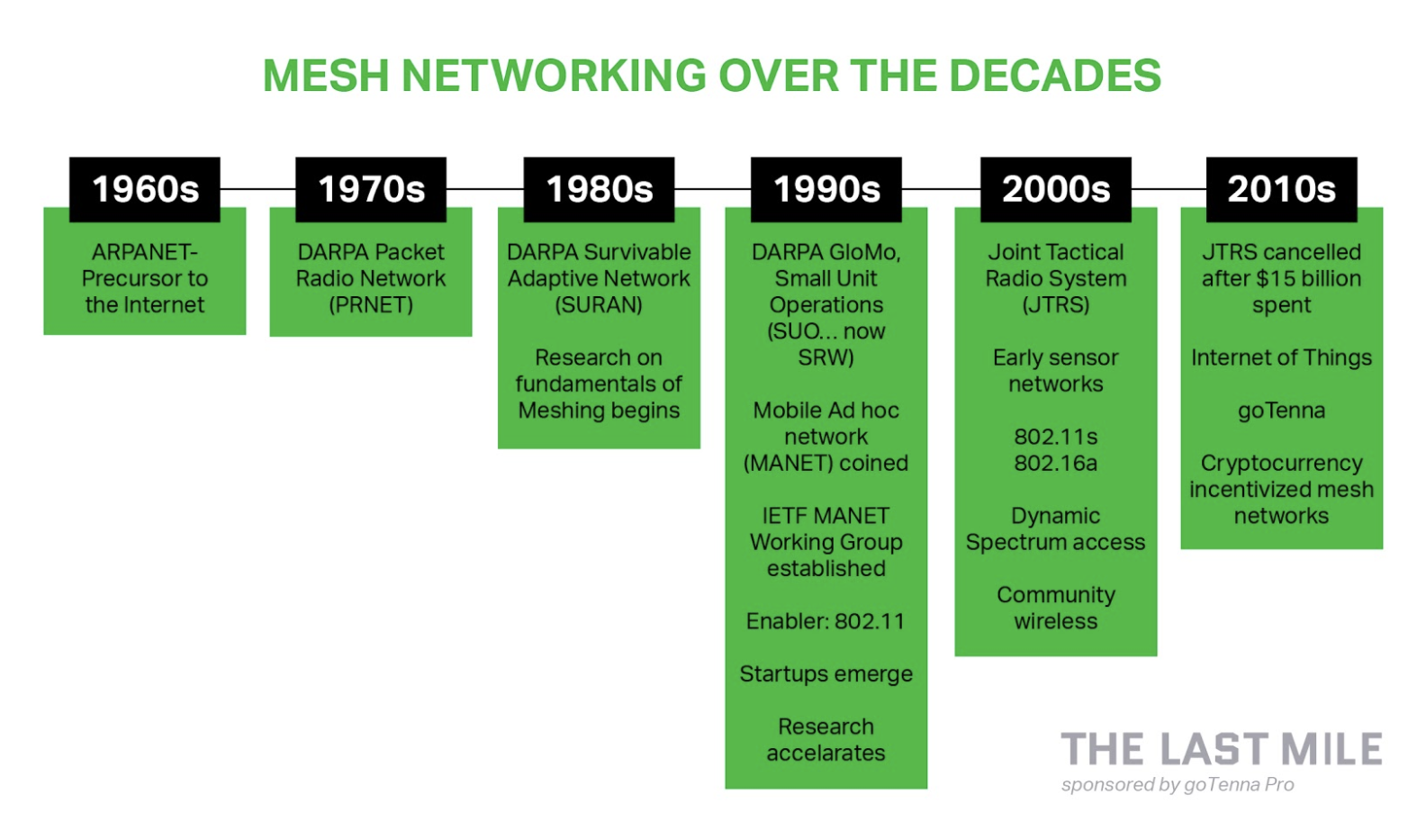 The Survivable Radio Network (SURAN)
The Survivable Radio Network (SURAN) was established in 1983 as a successor to the earlier PRNET project. An incremental, evolutionary program, SURAN was tasked with developing survivable network management and data transport protocols for large-scale packet radio networks. Its chief accomplishments included a comprehensive set of adaptive, robust, and secure network algorithms, and an experimental, low-cost, packet radio network.

A follow-on program—the Low-cost Packet Radio (LPR)—established in 1987, made further innovations in mobile networking protocols, and had additional goals including the management of radio spreading codes for security, increasing capacity, and scalability based on dynamic clustering. The prototype LPR radios were used by the Department of Defense throughout the 1990s for experimentation.

The Global Mobile Information Systems (GloMo)
The Global Mobile Information Systems (GloMo) was a multi-organization program funded by DARPA, with the goal of developing high-speed computation, signal processing, and miniaturization for mobile, wireless, and multimedia seen as critical to meeting defense requirements for rapidly deployable and robust information systems, and the DOD’s desire to modernize its communications and command and control systems.

A “vertically integrated” program, GloMo leveraged and integrated the earlier DARPA programs and tackled issues ranging from underlying radio and signal processing technology to the support of mobile applications. The technologies developed were always intended as catalysts for novel commercial applications, making the technology available to the military through private sector partners.

In addition to these government research programs, there has also been a series of government development programs of record that advanced the state of the art in mobile ad hoc networking, as described below.

Soldier Radio Waveform (SRW)
Intended for use at the squad and platoon level, Soldier Radio Waveform (SRW) is an open-standard voice and data waveform that extends wideband battlefield networks. SRW enables the transmission of real-time information to a dismounted soldier that was previously only available in vehicles or command posts. As a mobile ad hoc waveform, SRW can function as either a node or router within a wireless network to transmit vital information across long distances and over elevated terrain, including both natural and manmade obstructions.

Wideband Networking Waveform (WNW)
A similar but more robust platform than SRW, Wideband Networking Waveform (WNW) is designed to provide network connectivity to command posts at the platoon, company, and battalion level, and between aircraft and ground vehicles. With its mobile ad-hoc networking capabilities, WNW is designed for performance in urban settings or other terrain-constrained environments. WNW excels in these settings by locating specific network nodes and determining the best path to re-route and re-transmit communications whenever terrain or structures interfere with communication beyond line-of-sight.

The Joint Tactical Radio System (JTRS)
One notable misstep in the military’s quest for mesh networking was the Joint Tactical Radio System (JTRS), which aimed to replace a variety of existing military radios with a single set of reprogrammable software-defined radios that could turn everything from individual soldiers to warships at sea into nodes of a broadband radio-based mesh network.

While a perfect use case for mesh networking, the JTRS project was ultimately scrapped after a cost of more than $6 Billion. The project’s demise can be attributed to a variety of factors—software development problems, hardware implementation challenges, unrealistic development schedules, ‘scope creep’ as the various services involved all kept adding to their wish list of features, and a refusal on the part of the JTRS to iterate the radios and take a more modular approach.

In light of the JTRS cancellation, the services have moved on to building their own battlefield network systems, based largely on off-the-shelf commercial communications technology that has drawn on and benefitted from decades of R&D by DARPA in the military research programs discussed above. Private sector commercial vendors are already proving that they can accomplish most of what JTRS set out to do, but at a fraction of price.

However, today’s mesh networking protocols are not always built to support the same size of data packet transmissions. Teams typically use a combination of high and low-bandwidth solutions to form a redundant PACE plan that meets specific mission needs. For example, a higher-bandwidth mesh networking radio could support a team lead’s voice communications back to command, while a lower-bandwidth radio device like goTenna Pro can transmit near real-time location information for every soldier in a common operating picture or app like ATAK. 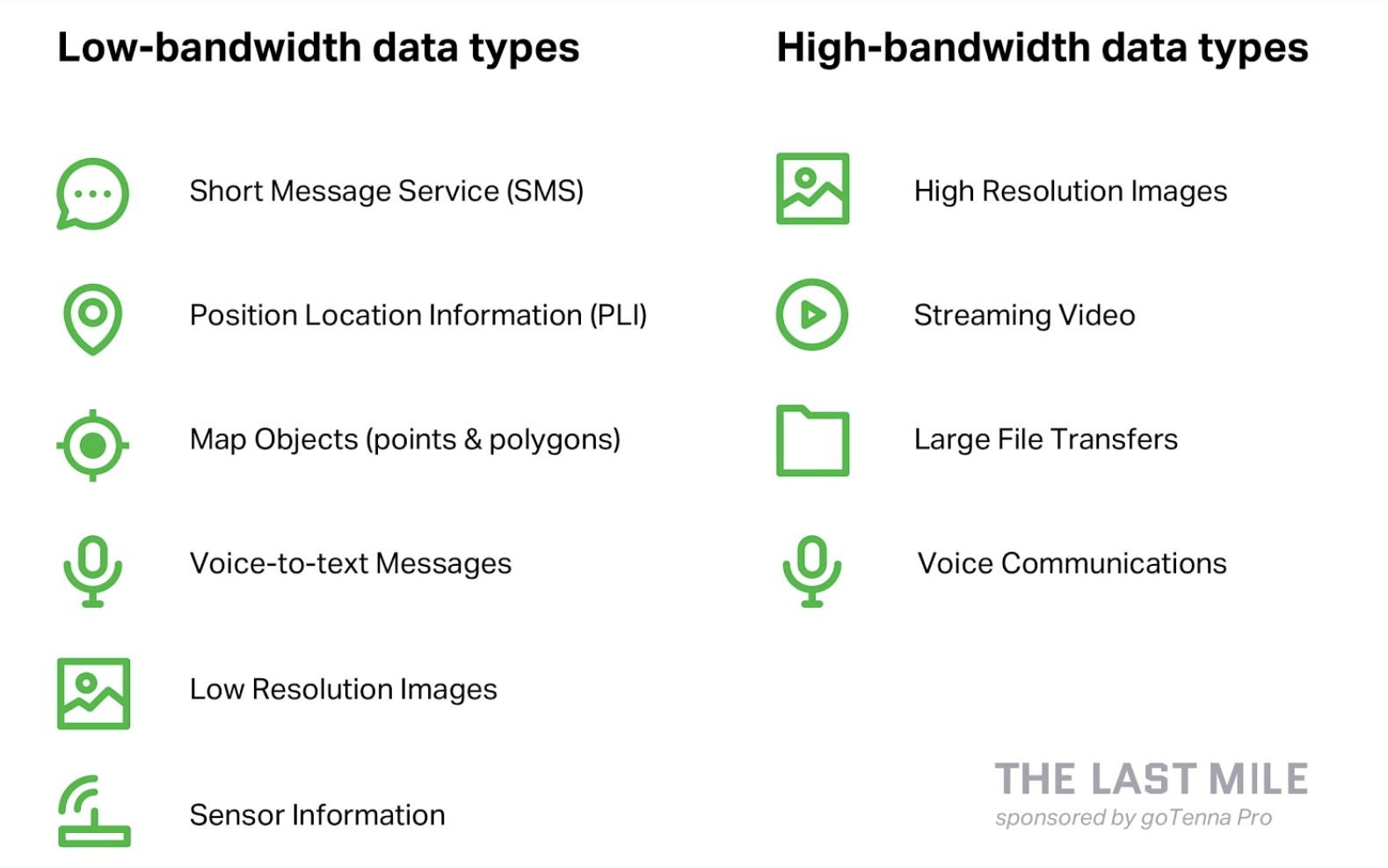 Often, the challenge for any modern mesh network is integrating different device waveforms so they can talk to each other. While many current systems are IP-based and require extensive training and device power, there are also power-efficient, non IP-based solutions like goTenna Pro that are much easier to program and deploy.

The future of mobile mesh networks in the U.S. military
With rapid technology advances in both the consumer and commercial spaces, there are certainly many future military applications for mesh networking on the horizon. Robotics Today recently published an article about the use of mesh networks for autonomous robots. According to the story, the U.S. Army granted Endeavor Robotics with a $100 million contract to build 1,200 robot platforms for medium-sized ground robots to be used for military operations in 2017.

The advantage of operating these robots using a mesh network is that each mesh node can serve as a relay node for the network without relying on one single point of failure. Mesh networks can also stay connected in environments like tunnels or concrete buildings where traditional forms of communication are typically inaccessible.

In the not so distant future, the military could be using a number of remotely piloted, airborne vehicles talking to a fleet of ground-based robots in a single, large-scale mesh network.

Brian Ellis is a Forward Deployed Engineer at goTenna. Brian retired from 20 years of military service, 15 of which were as a Green Beret in the US Army Special Forces as both a Special Forces Engineer and Special Forces Intelligence Sergeant. Brian has deployed to Europe, Africa, Iraq, and Afghanistan. He has extensive experience deploying mesh networks in the field. Brain also holds a General ED Associate Degree and Certifications in Emergency and Crisis Management. 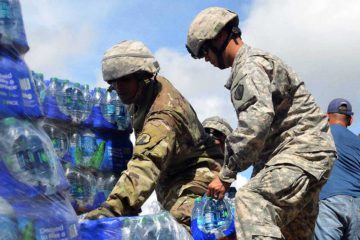 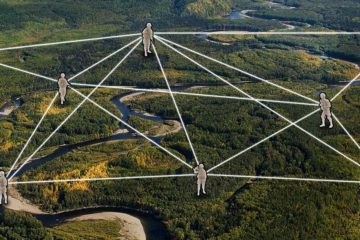