When the Bernalillo County Sheriff Department’s (BCSD) Metro Air Support Unit (MASU) receives a search and rescue call from dispatch, time, speed, and, most importantly, situational awareness (SA) are crucial, make-or-break factors that determine the outcome of a critical incident.

To add pressure to an already intense situation, New Mexico’s mountainous terrains, and the tree canopies that envelope them, naturally establish treacherous conditions on-ground, as well as dangerously low-visibility for an air unit looking down. Many times, it can be nearly impossible to coordinate and keep track of a sprawling rescue team, much less determine a patient’s location to establish a safe pathway for extraction.

Cue the Android Team Awareness Kit (ATAK). ATAK is a geospatial and communications application that enables comprehensive SA, navigation, location, communication, and data sharing at the edge. The ATAK collaborative mobile app provides a real-time display of team member locations and enables the sharing of encrypted texts, photos, and videos with other ATAK users deployed in the field. All essential tools that can help the BCSD MASU overcome the challenges created by the geography of the areas in which they operate.

Recently, BCSD’s Undersheriff Larry Koren, MASU’s Director of Maintenance, Ian Day, and Par Government’s Director of Applied Technology, David Tally, held a webinar to discuss ATAK’s capabilities and successful use-cases in the field, as well as give an update on potential functionalities that ATAK users may see in the near future. 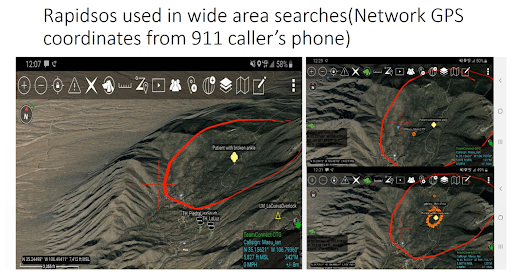 With ATAK, the Capabilities are Endless
ATAK was fundamentally built to support those deployed in disadvantaged locations where connectivity is unavailable or denied. For MASU, missions frequently occur in remote, difficult to reach areas, and the presence of uncontrollable risk factors like weather and ground hazards are not uncommon. In the past, these conditions posed major SA challenges for MASU first responders. For the command post, inadequate SA information made establishing team coordination a disorganized and inefficient process during critical incidents.

In ATAK, SA is a built-in asset, enabling rescue command centers to remotely monitor and track personnel, as well as lost or injured patients in the field. Having an Android device, such as a tablet or cell phone, is all that is required to implement the app. Rescue team members using ATAK will be receiving and seeing the same critical information in real-time, creating an environment for optimized communication and coordination across all mission personnel.

Using ATAK, those at the command center can swiftly call upon the necessary agencies, organize and safely deploy first responders, physically track all key personnel throughout the mission, and stage post-rescue transport or patient treatment. This technology has transformed mission coordination and eliminated wasted time. And this is all made possible through ATAK’s expansive set of growing capabilities.

Within the ATAK application is a powerful mapping engine, enabling roadmap, satellite, elevation, and FAA flight sectional imageries. Depending on the type of mission, two or more of these imageries can be overlapped and intersected, producing an incredibly robust vision of a selected area. Once the maps are configured for the mission, drawing tools and the insertion of shapes can be used to geofence exclusion zones, control zones, support zones, and recon areas. All these features, in unison, expedite organization, coordination, and communication within dynamic mission environments.

The app also enables users to drop customizable pinpoints representing key personnel onto the map interface. Once team members are online and designated a pinpoint on the map, ATAK tracks their breadcrumb trails for all users to see, allowing SA of team members at all times. Personnel tracking is the most important capability that ATAK offers, as it helps support mission safety by keeping SA in the forefront for all involved, as well as boosting the likelihood of a successful mission. 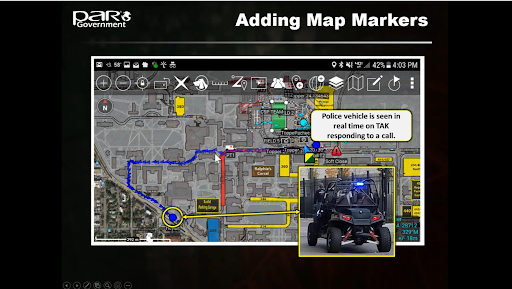 Once ATAK users configure their maps for their specific deployments, they can begin to build navigational routes for missions. First responders can input start and endpoints on the map interface, and ATAK will automatically build a route, or the users have the option to build custom routes themselves. ATAK can also integrate other types of sensory information that will better inform the navigation of a mission, such as pulling live feeds from nearby static cameras and livestream video from other network sources. Pulling livestream feeds from sources like traffic and highway cameras is especially valuable when conducting missions during inclement weather.

“We can use [traffic camera feeds] with the weather feeds that come into TAK,” said Day. “This allows us to assess weather conditions and road conditions for ground units responding to a scene… Or whether or not we want to fly in the inclement weather.” Taking it a step further, ATAK can overlay livestream video feeds on top of a team’s configured map. Other notable ATAK features include radar, temperature, winds, and surface visibility data.

By utilizing all the intersecting tools in ATAK’s arsenal, MASU has completely transformed the way it executes critical incident-based missions.

ATAK in Action
After BCSD rolled out ATAK for field use, it partnered with PAR Government to develop the SOS Token solution, which pairs with ATAK and enables first responders to contact lost patients and request them to share their location via a text messaged URL link. BCSD first responder agencies have also adopted Rapidsos, another ATAK-complementary solution that sends emergency dispatchers GPS locations of all 9-1-1 calls that are received, which are then shared with the responding mission team, giving them the green light to begin coordinating a rescue plan in ATAK. By combining ATAK, Rapidsos, and SOS Token solutions, BCSD rescue agencies have all the requisite information necessary to execute a search and rescue.

“With search and rescue missions, there are multiple agencies that get involved, and not knowing where those teams are is somewhat frustrating.” – BCSD Undersheriff, Larry Koren

One particular mission that the speakers highlighted was a helicopter extraction of an injured rock climber in the Sandia Mountains, a heavily wooded area with low visibility from above due to canopies formed by treetops. When the stranded, injured patient called 9-1-1, an SOS Token was issued, which shared the patient’s GPS coordinates with rescue team members, who immediately began routing rescue pathways for the ground and the air. An on-ground specialist was able to traverse to the patient by inputting the SOS Token coordinates into ATAK’s navigation engine. At the same time, the rescue helicopter pilot used ATAK to navigate to those same coordinates, dropping a paramedic down from a rope attached to the helicopter.

As the rescue operation was unfolding, a livestream camera positioned on the helicopter locked a video feed onto the same on-ground coordinates from the SOS Token, enabling the remote, off-site mission command center to have eyes on the situation at all times in the ATAK app. In addition to watching the live camera feed, all mission team members could track the breadcrumb trails of all responders who were in the field, both on the ground and in air. Once the patient was safely hoisted by the air unit, responders on-scene were able to communicate the patient’s condition to the mission command center, which allowed the command center to prepare the appropriate staging area for the mission’s next steps, whether that be transport to the hospital by a waiting ambulance, or other support services.

It’s worth noting that various agencies participated in this mission. In the past, mission crews faced many challenges due to the lack of streamlined communication and coordination among all the responding agencies and personnel. “With search and rescue missions, there are multiple agencies that get involved,” said undersheriff Koren. “And not knowing where those teams are is somewhat frustrating.” By integrating ATAK into their mission protocol, personnel across all the participating agencies were able to be on the same page for this successful rescue.

One unique advantage of using ATAK is that the application itself is network agnostic. “[ATAK] can work over a number of different networks,” said Tally. As a result, ATAK can be used during off-grid deployments, like in natural disaster scenarios when cellular networks may not be an option. 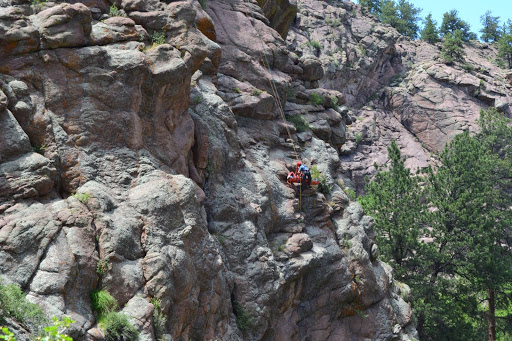 In the case of the injured rock climber, the mission crew was still connected to cellular internet that allowed ATAK’s ease of use. But in cases of wildfires, hurricanes, tornadoes, and floods, network connection provided by terrestrial networks can be knocked offline, making first response missions perilous and potentially chaotic. Through off-the-shelf products like goTenna Pro X, offline ATAK users can still connect and communicate through mobile mesh networking. Even when unpaired to a smartphone or tablet, goTenna Pro X devices serve as off-grid mesh relays for all other Pro X devices – eliminating or reducing the need for base stations and repeaters.

The Future of ATAK
The beauty of open-source applications is that new functionality can be developed by anyone at any time, and ATAK is no exception. Ian Day previewed some potential capabilities that ATAK users may see in the near future.

The first was a solution that would pair first responder body cams with ATAK, and enable cursor on target camera feeds. If a police officer is in distress, this could be a solution that creates geo points based on an ATAK alert, allowing responding units to come into a scene in a calculated flanking position to the threat. Live video stream will also tell responding units the condition of the officer and what resources they may need at the time. Day also mentioned adding first responder radio feeds to ATAK as another possible future solution, enabling livestream video and audio integration.

When asked if a version of ATAK would be available for iOS devices, Tally confirmed that it’s in the works, but warns that an iOS ATAK-equivalent may take time to build out. “For expectation management…ATAK has a ten-year head start in a lot of ways,” said Tally. “When you do see a version of ATAK that comes out to support iOS, it will really be just the basic capabilities.”

For additional information on how ATAK and mobile mesh networking can work, in tandem, to enable off-the-grid communications and situational awareness, click HERE.